He enlisted in the Israel Defense Force (ISF) in 1994 and was recruited by the ‘Tzanchanim’, the parachute core and continued serving in in the IDF for 20 years.

Blitzblau holds a B.A. in Diplomacy Strategy and Political Science and an M.A. in National Security and Counter Terrorism. Both degrees were awarded from the IDC in Herzliya, Israel .

On 18th January 2005, Blitzblau was severely injured in a terror attack, when a suicide bomber blew himself up right next to him. The explosion caused him to lose sight in both eyes, as well as severe blast and burn injuries. Oded Sharon, the Israeli Secret Service agent, was killed in this attack.

Eight months later, Blitzblau was back in active service and went on to complete another 10 years of service in the IDF.

Over the years, Blitzblau has participated in several Parathirathlon competitions, he achieved his highest ranking after crossing the finish line in 1st place, in Manaus, Brazil, in the sprint distance para-triathlon category, PT5, for the blind and visually impaired, guided by the fastest Israeli “Iron Man”, Gilad Rotem

In February 2014, Blitzblau was elected by the Israeli Olympic committee, as The Athlete of the Year.

Today, he works at sygnia with Team8 , where he lectures on a voluntary basis as part of the community’s donation. He gave lectures in 150 schools around the country. The lecture deals with the subject of cyber, integrating his personal story and coping with physical and mental crises. Students are exposed to the cyber issue from a position of ability to help people with disabilities.

In a stirring lecture Oren talks about Success, Career, Hard Crisis, Rehabilitation and Regaining Success again.
Blitzblau tells his personal story. He recently completed 20 years of service in the Israel Defense Forces, 10 of them after he was seriously injured in operational activity in the Gaza Strip in January 2005, during which he lost his sight.
In an emotional lecture, Oren talks about a promising military career that was interrupted due to a serious injury during operational activity. He shares his endless coping with his injury, being a parent and a husband as a blind man, being a disabled military man within a high-quality MI population. In addition, Oren shares his decision to return to intensive sports activities, despite his disabilities, as a significant rehabilitation tool in dealing with daily challenges. 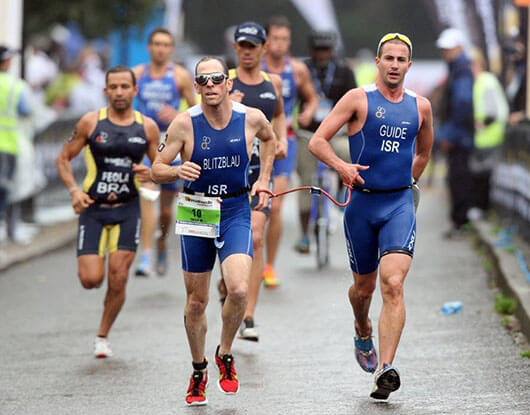