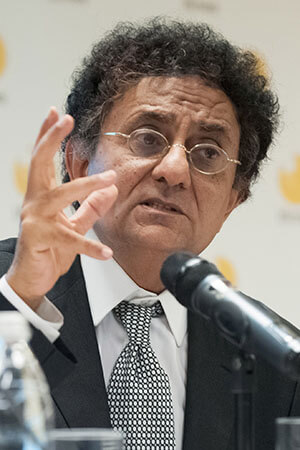 Jurist, Researcher, Journalist, Lecturer,  and writes a regular column for Yedioth Ahronoth. In recent years he has published a series of comparative studies on the Israeli-Arab conflict, and by the end of 2014, he has published the book “The Lies Industry,” which reached number one on the bestseller list.  Yemini was born in 1954 and was raised in Givat Amal, Tel Aviv. He studied history and law at Tel Aviv University and After that, he spent a few years practicing law. He was appointed an advisor to the Ministry of Immigrant Absorption and served as the ministry’s spokesman. He then turned to a Journalistic career. Yemini made his debut in the press in Ma’ariv, where he wrote a weekly political column in the weekend magazine. In 2003 he became the editor of the opinion section of the newspaper and in the years 2009-2014, he wrote a blog on the newspaper’s website. Today he writes for Yedioth Ahronoth and publishes articles in English in the “Times of Israel”. Yemini is a political activist and publicist with solid and unique opinions. In 1986 he published his book “Political Punch”. In 1989 he was the first editor of the social journal “The Hammer” and was a member of T.a.m.i, a Traditional Sephardic party that worked for equal opportunities. Over the years he served as the head of the program to train social activists at the Tel Aviv University. In the 2012 elections, Yemini was asked by Tzipi Livni to join her party, but he decided to turn down her proposal in order to freely pursuing his research and keep on writing. His best-known book is “The Lies Industry” (2014), which deals with the negative attitude of the Academy and the Israeli and International Media towards Israel and the Arab-Israeli conflict, and the biased coverage it receives in the press. The book presents studies that refute Israel’s harsh claims on this level. He calls the claims against Israel “politically correct anti-Semitism.” Many people reject Yemini’s claims and ask him to define his political views. Yemini claims that each side has good arguments and that every issue must be considered on its merits, based on facts and systematic research. In the past, Yemini identified himself several times as a Zionist Leftist. Yemini also expressed his opinion on social issues such as infiltrators from Africa, the absorption of Ethiopian Jews in Israel and the Tents-protest. In 2003 he was awarded The Israeli prize for the Media Criticism by the IMW (Israel’s Media Watch) for his achievements.

Demonization and De-Legitimization of the state of Israel in the Press and the Academy, in Israel and in the free World. In the lecture, Yemini will distinguish between legitimate criticism and false claims while refuting lies and anchoring facts. The lecture is a must for anyone whom the truth is a top value for him/her.

Myths and Facts – Israel is a victim of the World Lies Industry but so are the Palestinians, whom the Lies Industry perpetuate their suffer and keeps them from a fair settlement. The lecture reviews the history of the conflict while focusing on the facts.

On the role of the Academy in Israel and the world regarding the deterioration of the Israeli-Arab Conflict. How does an important source of knowledge such as the Academy become the number one institute in spreading lies about Israel?

The Anti-Zionism is the NEW Anti-Semitism, only it’s undercover. The proper name is: “Politically Correct Anti-Semitism”. This usually happens under the auspices of Human Rights discourse. In the lecture, we will examine the relationship between the two and present current examples

In this lecture we will compare between the departure, or expulsion of the Israeli Arabs before and during the Independence war, the Pogroms and Deportation, from which the Jews of the Arab and Islamic countries suffered, before and after the awakening of the Zionism. All this, against the backdrop of the tremendous wave of population exchange and expulsion in the first half of the last century. We will also talk about the significance of commemorating the Palestinian Nakba every year, and how presenting the story of the Jewish Nakba may contribute to reconciliation between the nations